I can always spot the golfers at the gym because they are the ones lined up for the oblique twister machines and doing cable rotations until they can’t lift their arms. I’ll tell you a secret: they are wasting their time.

I wanted to write today about the one lift that will make the fastest and biggest improvementto your golf game: the deadlift.

How Muscles are Recruited in the Golf Swing

Before I get into the why and how behind deadlifting, let’s talk a little about how muscles are recruited in the golf swing. Every swing coach has a different swing style and that is great; different styles suit different people better than others. However, there are some principles that are true regardless of style.

At the top of your backswing, tension starts in the instep of your trail foot, which drives into the ground creating a powerful hip rotation which transfers through the core, through the shoulders, the hands, and then the club. What I want to focus on here are those first couple steps in the sequence. These are the ones most amateurs (and some pros) have difficulty with.

Power Isn’t Created in the Core

The first important thing to note is that power isn’t being created in the core. In fact, creating power is not what the core is designed to do. I will address the core more in Part 3 of this blog but the short version is that, yes, the core is a powerful muscle group, but its main purpose is the TRANSFER of power from lower to upper body or vice versa.

When a golfer’s training regimen focuses on core rotation machines and isolating the obliques, it will manifest in their swing. It will lead to trying to create power from the obliques in the downswing, which will cause decreased hip activation, and the upper body will take over. Instead we need to focus on the right muscles. Deadlifting is a hip dominant exercise. By focusing on the hips first, deadlifting helps reinforce proper muscle sequencing in your swing.

So why should golfers deadlift? The answer is what everyone wants to hear: MORE POWER, MORE DISTANCE! Most people don’t immediately make the connection between heavy lifting and power, but there have been multiple studies that demonstrate a very strong correlation between an increase in deadlift max and increase in sprint speed and standing broad jump, which are the two primary athletic tests for full body power generation.

In your golf swing, power is generated by the hips and carries through the rest of the body. To get more power and distance, focus on the hips. Deadlifting starts by driving your feet into the ground, then driving powerfully through the hips while keeping the spine stable. It’s the same kinetic sequence as your golf swing. Deadlifting (and squatting) are the BEST exercises for strong hips, as well as hip power integration with the rest of the body.

Read on to part 2 in the series.

Are you ready to play your best through
effective, focused, and proven training? 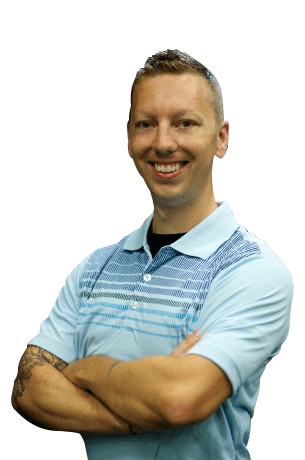 Ryan Blackburn is the owner of Orlando Golf Performance in Orlando, FL. He works with golfers on every major tour as well as college and amateur players. He holds multiple certifications in the field of functional movement and athletic performance.

Do you really want to delete card?

This process cannot be undone.

Card has been deleted successfully.